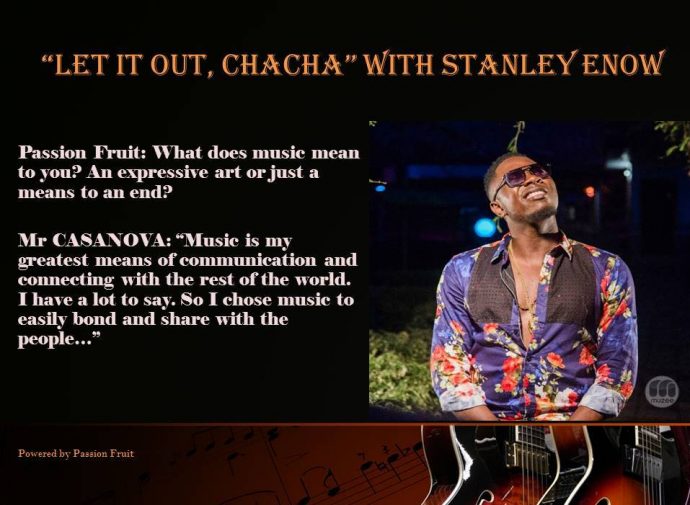 Music is Art and art is Beauty; says Passion Fruit.

Bayangui seemed as far off as it is, but we did not mind tracing our way to it, if it meant meeting our Bayangui Boy, hein?! From the Southwest, then to the West and then here today he finds himself, in the Littoral Region – Let us welcome our Cameroonian SuperStar Stanley Enow on the Passion Fruit platform today.

Though from an English background, Stanley Enow has undisputably broke records singing exquisitely in both national languages – English & French, collaborated with music legends around the globe and received both national and international recognitions. It is easy to assume the young Music Maestro will take a break after he drops each hit, but never his story! Stanley continues to baffle the music world as well as his fans across the continent and at large with each track and album release. And if you ever thought it was all about the fame, we will surprise you. Read below to know all about Stanley, His music, His values and His love for humanity…

Passion Fruit: Hi, Mr Casanova, So Good having you talk to us! How have you been?

Mr Casanova: The pleasure is all mine talking to my lovely Passion Fruit. I have been very well. How about you?

Passion Fruit: Doing super, per Motherland standards! *laughs*. Because we are an intuitive set, we figure you got a lot of projects coming up. A little of it? Even if it’s just a tiny bit?

Mr Casanova: I am always on to the next move. Life is evolutionary, so too am I. I am currently busy with the promotion of my latest smash hit single, CASANOVA, which is very much appreciated by all my fans: men, woman, children etc. I am also doing finishing touches on my second studio album which is very much awaited with the same anxiety as my first album, #SoldierLikeMaPapa. This album will be a two phased album: Afro and Hip Hop and will feature the likes of Nicki Minaj, The Legendary Petit Pays, Fally Ipupa, DAVIDO, Pitt Baccadi, Mr Eazi, Daphne, Locko, Nabila, Tzy Panchak.

Passion Fruit: You’ve come a long way since your hit song “Hein Pere”, you’ve won massive awards around the continent and had exceptional collaborations. How do you regard your journey?

Mr Casanova: Like I earlier said life is a journey. HEIN PERE was the genesis of my professional career which has been very successful so far. HEIN PERE was followed by several other hit songs from me of the likes of KING KONG, WORK HARD, TUMBUBOSS, NJAMA NJAMA COW, BOUNCE etc. Thanks to the support of my fans, I have lots of distinctions to back up my position (MTV AWARD, AFRIMA, CANAL D’OR, BALAFON, URBAN JAMZ AWARDS, SONNAH AWARD) etc.

Nevertheless, the core essence of music is all about sharing and I like sharing with my colleagues home and abroad. I have collaborated with the likes of Mr Eazi, Nyanda of Brick and Lace, Ice Prince Zamani, Claude Ndam, Montess and many others. It’s always a pleasure.

Passion Fruit: What does music mean to you? An expressive art or just a means to an end?

Mr CASANOVA: Music is my greatest means of communication and connecting with the rest of the world. I have a lot to say. So I chose music to easily bond and share with the people.

Passion Fruit: What can you say has been your greatest foundation and practicing values seeing you through all of this success?

Mr Casanova: Obviously it’s God Almighty. Without God nothing is possible. I face 1001 challenges on daily basis but God helps me get back on my feet all the time.

Passion Fruit: Could you say something about your life before gave you determination? Can you let us in on the younger version of Stanley, who was he up to the point he transfused to “Pere” & now “Casanova”?

Mr Casanova: When I was young I always knew what I wanted. From an early age it was easy to see that I had a deep passion for music. I was merely walking slowly but steadily towards my destiny. Before HEIN PERE just like other young university graduates I had plans to get a regular job as a TV Presenter here in Douala but I was a little hesitant as that could slow down my music career. While trying to get a job in that domain, I still hung on to my dream and passion. So I had recorded HEIN PERE long ago. I made some finishing touches and released the song that became the biggest Hip Hop song that Cameroon has known so far. HEIN PERE became a real game changer. I still remain grateful to God and to my fans for their support .

In Casanova without being a moralist reformer and yet perhaps advocating for TRUE LOVE, I call on the attention of young guys and gentlemen not to break the hearts of their partners but to love and respect them. Off course you know ME I NO BE CASANOVA.

Passion Fruit: *hahahahaha* “We know” in our XPLOIT COMEDY VOICE! *winks*I must tell you what we are all about. We are a global platform with main objective to decipher intent and reality from actions & news, respectively, uplifting good over bad. We hear tons of stories about Stanley, but I want to ask you, who is Stanley? How do you define your personality?

Mr Casanova: You are doing such a great job and I like that. Factually once one gets on the spotlight for sure there will always be tons of unfounded stories and rumours about you coming from your detractors. You just need to have a strong mind to ignore all negativity and focus on what is beneficial for you.

Passion Fruit: Talking about emotions? What is Stanley? A lover, A Giver, A Fighter, Or A Breaker in relation to people in general, relationships, work, religion, politics?

Mr Casanova: STANLEY ENOW is a lover and a giver.  I give a lot as a lot has been given to me already. I am on a give back trip.

Passion Fruit: Woawww! (Follow Up) *flips hair*, hummmmm lover? So we can fix a date night? Or did you say there’s Mere? And she got no chill…on the snap and all? *frowns*. Yeah me and plenty other mamas want clarity now now – Is the KingKong taken?

Mr Casanova: I am in a very complicated relationship. I am deeply in love with my music and the bond between my music and myself is so strong that I don’t see myself separating from my music anytime soon. I wouldn’t mind having a date with you. We will listen to Casanova and to other songs of my album and share ideas, mere.

Passion Fruit: *shrugs & rolls eyes with a grin* How do you want us to remember you?

Mr Casanova: I will like the world to remember me as that loving Bayangui boy who had great love for the world such that he decided to share his life experiences with them through good music.

Passion Fruit: Any Last words, to those who look up to you? Those who have you as their muse?

Mr Casanova: I really do love and care for you. Let’s be there for each other to the best of our ability. Because I love you I have cooked up some real good music to share with you in my upcoming album. In return, please, will be delighted you keep supporting my works and pray for me. Let’s make history again together.

Passion Fruit: Stanley, I am a huge fan! Thank you so much!

Mr Casanova: The pleasure is all mine.

“LET IT OUT, CHACHA” WITH CHO NDIFORCHU

“LET IT OUT, CHACHA” WITH GLOBAL PAINT FOR CHARITY’s, RONY DELGARDE

“LET IT OUT, CHACHA” WITH BANDY KIKI

“LET IT OUT, CHACHA” WITH GLOBAL PAINT FOR CHARITY’s, RONY DELGARDE

BEING A WORD SMITH…

WHEN LIFE THROWS THE ANTICS, CATCH ITS BALLS

“LET IT OUT, CHACHA” WITH THE FOUNDER AND CEO OF BARBIEMASH...

“LET IT OUT, CHACHA” WITH CHO NDIFORCHU

ABOUT US
‘LET it OUT, ChaCha’ gives anyone and everyone a voice. The past years, writing and reading, this side of the continent has often been stereotyped as boring, time consuming and strenuous.
Contact us: info@fruitdepassiona.com
FOLLOW US
© Designed By: CM MEDIA GROUP
MORE STORIES

“LET IT OUT, CHACHA” WITH NINA NGWA LUM (AKA THE ENCOURAGING...